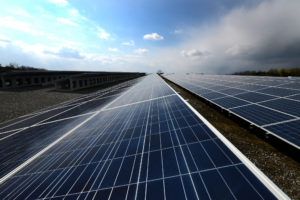 2017 may be the year that cognizance of the global warming threat reached a tipping point. Powerful hurricanes inundated Houston, Florida, Puerto Rico, and other lands, causing painful losses in lives and treasure. In what some might have thought was an Orson Welles “The War of the Worlds” sci-fi redux, Hurricane Ophelia, the easternmost Atlantic Ocean hurricane ever, hit Ireland. Drought and excessive heat caused devastating wildfires in California that are still burning. The intensification of hurricanes and drought predicted by climate scientists are coming true. This is no Chinese hoax.

The only way to slow the rise of human generated atmospheric carbon accumulation, the main cause of global warming, is to quickly transition to low-carbon energy sources, especially solar, wind, geothermal, hydro, and nuclear. Solar and wind continue to be the options with the most potential because they have distinct advantages in cost, geographic range, and rapidly improving technological effectiveness and efficiency.

In contrast to wind turbines, which still require advanced technology and expertise, competition between solar companies is fierce, particularly because solar panel costs are low and continuing to decline. Just ask any renewable energy investor: investors in wind turbine manufacturers such as Vestas Wind Systems have done phenomenally well, but not so well in solar companies such as bankrupt Solyndra and SunEdison.

Solar power businesses are not homogenous. For instance, SolarCity (now a subsidiary of Tesla) and Sunrun are solar panel rooftop installers while others, such as First Solar and Jinko Solar, are primarily solar panel manufacturers. Even within solar manufacturers there are two major types, crystalline silicon and cadmium telluride thin-film.

Especially within the installer/manufacturing dichotomy, business interests diverge and conflict arises. U.S. installers want inexpensive solar panels, which frequently means low tariff imports from China. U.S. manufacturers want tariffs and quotas so that they can better compete with Chinese manufacturers. Although the United States (and Europe) imposed modest anti-dumping and countervailing duties on solar imports from China and Taiwan, it appears not to have harmed aggregate solar panel installations in the U.S. and U.S. solar manufacturers continued to complain about competition from Asia. Something had to give and it has.

On September 22, 2017, in a 4-0 vote, the U.S. International Trade Commission (ITC) ruled “that increased imports of crystalline silicon photovoltaic cells (whether or not partially or fully assembled into other products) are being imported into the United States in such increased quantities as to be a substantial cause of serious injury to the domestic industry producing an article like or directly competitive with the imported article.” On October 31, 2017, the ITC recommended to President Donald J. Trump tariffs of up to 30% be imposed on imports of solar modules and cells. With the ITC recommendation issued, the president has a flexible 60-90 day window to decide whether to impose tariffs and if so, the specifics of the imposition. Due to World Trade Organization rules under the Agreement on Safeguards, the tariffs would be limited to under four years and thus temporary.

Solar panel installers, as well as climate change activists, are extremely worried. Large tariff increases will dramatically raise costs and harm the expansion of rooftop solar panel installations in the U.S. Moreover, it will also likely lead to widespread job losses in the burgeoning solar installation business. Most importantly, it will slow the transition to a low-carbon planet and the perilous consequences that this entails. Who knew international trade could be so complicated?